My Brother From Another Mother 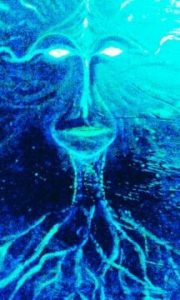 I first met Damien sitting in the lobby of the Lotus Temple, Byron Bay.  He was sitting on a chair and his energy was calm, quiet and unassuming.  I was a ‘temporary receptionist’ there so I asked him if I could help him.  He looked up to respond…  bapow… his eyes were the clearest blue and etheric angelic light shone out of them along with a huge smile he responded with something about waiting for Zjael…  I didn’t quite hear as I was totally mesmerized by that light so I continued to train the ‘temporary apprentice’ Fab, beside me.

Eventually I said to Damien… “I know who you are! I recognize you.” He looked up smiling and said, “Yup, I asked for you!”

That was 6 years ago and our relationship has blossomed and grown with that same foundation of mutual remembrance, trust and respect for who we are to the world and each other.  Soul family.

In that time his physical journey has been a series of detoxing his body and stepping up into his power both spiritually and physically. 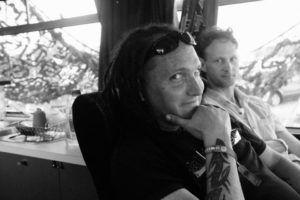 Damien’s first 14 years were mainly spent in hospitals; he was born with tumors in his brain which were operated on to remove them; they continued to regrow even with huge amounts of chemo and radium and the most advanced medical treatments… So, 13 operations later, copious amounts of poisons and drugs in his system and virtually no education nor social life he told his angels… “Enough is Enough.  I want a life!”

He read a book about curing cancer with Meditation which inspired him to take hold of the reigns of his life.  Within 2 years of breathing and meditation practice and working closely with his Angels he dissolved the concepts which were creating the tumors.  This gave him tremendous momentum and fulfillment to explore Planet Earth, catch up with his education and work with Angelic Beings in Spirit and Human form.  Slowly he started detoxing his system from the high chemical residue and stopped all medications.  In 14 years of making this decision he was toxin and medication free much to the amazement and threats from the medical profession but the results spoke for themselves.

When he met, me he was doing his final heavy metals detox and once complete he had his Orientation Profile. 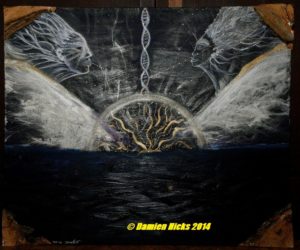 Making perfect sense for him it added a level of clarity and dauntlessness that he truly was working with his angelic team.  He went on to conquer his school certificate with literacy, math and spelling and eventually claimed a driver’s license; a huge breakthrough as his initial life expectancy was only at best a perpetual round of operations, chemo and radium.

Damien has come to lift the Planetary Energy with 12 strand DNA rewiring through his artwork, music and healings.  By earning a living sharing the new energy of Planet Earth through his creations he is exploring new frontiers in his own limitations and empowering others.  The depth of healing that occurs in one of his session is life shifting; in fact, dimensional shifting; highly recommended healings which can be done face to face or by distance.

You can explore some of Damien’s artwork at Gallery or by going to www.redbubble.com and in the search bar type Damien Hicks to discover what his artwork is produced onto. Or by phoning him on +61 432 156 555.

Damien embodies and is a prime example of living from the inside out, working with spirit hand in hand and creativity in action, a true inspiration to all.