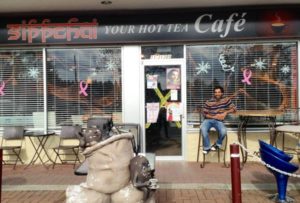 Jas Anand was raised in the Sikh religion. He explains that, ‘Sikh’s will celebrate everything….Chinese New Year….the Jewish holidays….all holidays, because they believe in One God and they don’t know if it’s a he/she/it or otherwise but if you’re having a party in honor of God?, let us be involved because we want to be anywhere God is.’ Their temples are square with doors on all sides so that no matter who you are or where you come from N, S, E or W you are welcome.

On completion of high school, Jas opted out of Post Secondary and began to work to gain enough cash flow to travel, which he loved. In order to continue traveling, he acquired, in three and a half short months (what takes most people 2-3 years), a full time position with a major airline. He quickly excelled in his Customer Service position but two and a half years into it ‘Epiphany Time’ showed up when he realized he was working way too hard for not much money. 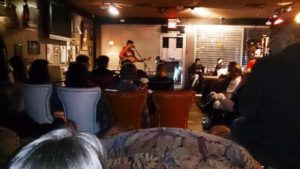 Within days he decided to change course and ‘chase the dollar’ working at a bank because ‘what better place to learn about business?’ Within a few years, however, of taking ‘the weight of Canada’ home with him, observing that the need for financial assistance concerned all cultures, and feeling frustrated and depressed about being unable to help the majority of people who walked through the doors of his bank, he decided to take a three month leave of absence to attend a wedding with his father in India.

He began to see a different side of life in India and decided to stay for several more months. India showed him the happy side of life without money. “In India there’s a lot of poverty. You go places and see things and you think ‘people really work for that every day and still don’t get ahead?’ It’s tough to watch every single day but they’re genuinely happy. They know and care about their neighbors. They don’t lock their doors at night. [There’s an attitude of ‘what happens will happen’, ‘no worries’].”

On this last visit to India in 2006, all the rich experiences of life there left him feeling melancholy about coming back to Canada. His Indian relatives were sad to see him go and he was sad to be leaving them. “India is ALIVE. There are always people in the streets all hours of the day and night. Real Estate is not a business. People own the same house for their entire life and the two people who work in the household earn enough to support the rest of the family. There is always someone in the house to hang out with.”

He’s been to India a number of times in his life and is still continuously learning all the nuances of his roots and culture. Tea is offered throughout the day at everybody’s house. Jas wasn’t into drinking it during this last visit but as a farewell gesture at the airport, he took five of his family members for tea. The very engaging ‘Tea Shack Rail Cart Guy’ charged 30 rupees ($1 Canadian) for six cups of tea. The significance of that experience was deeply moving for Jas. The emotion of the occasion was in everybody’s eyes.

On the second leg of his trip home, in Frankfurt, Germany, Jas tried to recreated the ‘tea shack’ experience; same brand of tea, this time only one cup, 6 Euros ($12 Canadian). This experience of the monetary difference between the two cultures planted a seed that caused Jas to make a change in his life.

Back in Canada, two more years at the bank and no longer able to get passionate about mortgages, he spoke to his manager, ‘I don’t think I can [continue this work]. I just don’t believe in corporate business anymore.’

In 2008 a friend asked Jas to drive as a courier for his business. Jas loves driving and in the ‘right brain’ action of that activity he was able to relax enough to begin receiving inspiration about what he wanted to do with the rest of his life. He had an idea to go back and look at his high school notes. He discovered that in a 1995 meeting with his Grade 12 school counselor for a session on ‘What do I want to do in life?’, customer service and owning a coffee shop were strong areas for him. He was going to name his coffee shop ‘SPILL YOUR BEANS, A place where people could come and hang out and just talk’.

Taking the next few years to save some money, and then borrowing from his mother and friends so they could reap the rewards of his business, he was able to avoid paying interest to a bank. The coffee shop idea morphed into a ‘tea cafe’ as tea is a more soothing and relaxing energy. So, in December, 2011, ’SippChai ~ Your Hot Tea Cafe’ was born.

Jas genuinely cares about people and exudes an attitude of ‘live and let live’, ‘how may I help you’, ‘let’s work together for the common good’. He’s incorporated photos and posters of every avenue of spirituality and all ways of life into his tea house. He’s never advertised, doesn’t do flyers, and didn’t do a Grand Opening. Customers find him through word of mouth.

‘The music just happened’, he says. Jas hosts music evenings at his cafe and I really admire and appreciate the welcoming environment that he provides for the musicians who perform there. He sets it up theatre style with comfortable chairs and tables so the audience focuses their attention on the performer. It makes for a relaxing atmosphere not unlike someone’s living room.

“We have a lot of first timers who come here. They’ll approach me and say ‘Hey, I play, I’ve never done this before’, and I’ll say, ‘Well why don’t you start here’, and they’re like, ‘Really? You think it could work?’ and I’ll say, ‘Send me some music, let me listen to it’. Most people are their own biggest critics and hear their own flaws thinking, ‘ no it’s not good enough’. The audience doesn’t know it’s a flaw. When I hear it, the impression is ‘That was good. Yeah for sure you can do that here’. They get reassurance and their friends and family support them which then leads to, ‘Hey Jas that was fun! Can we do that again sometime?’ ”

A young woman showed up one day as he was closing. He said ‘come on I’ll make you something’. Three hours later they were still talking. She ended up doing her first gig at SippChai. She did ‘crowd funding’ on SippChai’s Facebook page to help raise the money to record her first CD which is now for sale in the cafe.

SippChai attracts groups with varied interests from scrabble, to AA, to City Hall meetings, a book club and young Catholic adults. ‘It’s a place where young adults in the community come to hangout’.

Jas has a knack for pulling the community together in team work. His 2016 ‘Cup of Tea for Community’ Fund Raising Calendar speaks volumes, with twelve months focusing on every aspect of help available in the community, from pregnancy issues, to teen issues, to food support and more. It’s hoped the calendar will raise $100,000 by year end for the various charities in the community, culminating in November and December with the Salvation Army and the local Food Bank. With the goodwill connections he’s established locally through his business, he’s hoping to turn $5,000 cash into $10,000 worth of goods for both these charities in time for Christmas.

And so, twenty years later, his high school ‘SPILL YOUR BEANS’ idea has come full circle and is now the foundation for a Talk Show he plans to host Sunday evenings at his cafe. Watch for this man……..as the journey continues.

Drop in sometime when you’re in the neighborhood.
by Irene Edwards, Delta, British Columbia